Winslow Homer’s painting, The Veteran in a New Field (1865) depicts a hopeful image for America. The bountiful fields of grain seem to stretch on and on while the farmer’s uniform jacket has been cast aside.  For a full analysis of this painting see the National Endowment for the Humanities Picturing America site and this Edsitement lesson which includes a “map” to the painting highlighting the many symbols and their meanings.

While there were numerous veterans who returned to their northern farms and picked up their scythes, there were many other veterans who returned to very different fields–fields they didn’t own and crops they couldn’t sell.  Natasha Trethewey responds to Homer’s painting in a poem called Again, The Fields. The poem is a reminder that many African-American veterans returned from the Civil War only to become bound into the sharecropping system.

AGAIN, THE FIELDS
After Winslow Homer
No more muskets, the bone-drag
weariness of marching, the trampled
grass, soaked earth red as the wine
of sacrament. Now, the veteran
turns toward a new field, bright
as domes of the republic. Here,
he has shrugged off the past–his jacket
and canteen flung down in the corner.
At the center of the painting, he anchors
the trinity, joining earth and sky.
The wheat falls beneath his scythe–
a language of bounty –the swaths
like scripture on the field’s open page.
Boundless, the wheat stretches beyond
the frame, as if toward a distant field–
the white canvas where sky and cotton
meet, where another veteran toils,
his hands the color of dark soil.

Have your students read this poem aloud.

What images do they envision in the first stanza? Could they find a Civil War painting or photograph that might illustrate that bone-drag weariness of marching?

See if they can find an image that depicts this other veteran. 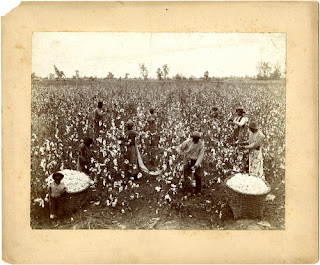 Mississippi Dept. of Archives and History

This exercise might be an interesting transition from the Civil War to Reconstruction and the New South.